For us, protection of the environment means acting in a way that is ecologically and economically responsible

We are happy to taken on this great responsibility

To ensure that we are well positioned with regard to environmental protection, able to react to changes and to constantly monitor our actions, we have defined particular areas of focus:

We regard the responsible use of resources as an important part of sustainable business operations – along the entire process chain.

Appropriate to the new Packaging Act (VerpackG) ASTRO Strobel conducts the complete redemption and recycling of all transport packagings via EKO-PUNKT Ltd. since 01.01.2018.

The sales packaging is additionally handled by „Interseroh+ – Die Recycling Allianz“ since 01.01.2023.

Certificate of participation in the Interseroh+ dual system (de)

Since July 1st, 2006, the EU-guidline "RoHS" is in effect. This guidline prohibits selling goods, inside the EU, which contain the below listed substances.
http://europa.eu.int/scadplus/leg/en/lvb/l21210.htm

These directives - short form „RoHS“ (Restriction of Hazardous Substances) and „WEEE“ (Waste Electrical and Electronic Equipment) - rule the disposal of electronical waste and permit the selling of new devices which have lead, mercury, cadmium, chrome 6 and/or bromed flame savers (PBB, PBDE) as components. 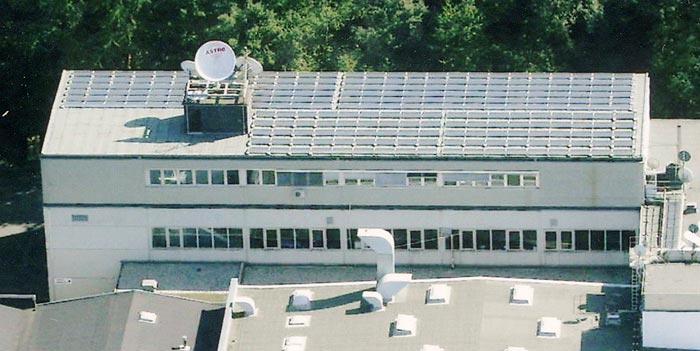 In 2011 a photovoltaics device with 49,1 kW peak was installed on the roof of the company building. ASTRO makes it's contribution to energy revolution and accomodates sustained yield and protection of environmment. 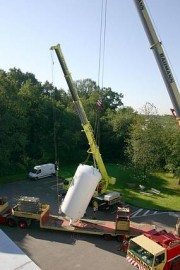 When the european guideline 2002/96EG fürr Elektro- und Elektroaltgeräte (WEEE) 2002/95/EG refering to reduction of dangerous materials in electronic devices was introduced, the use of lead in electronic devices was permitted by law. By using Nitrogen it is possible to improve the results of soldering without using lead or other dangerous materials.
The photo shows the mounting of our Nitrogen tank. 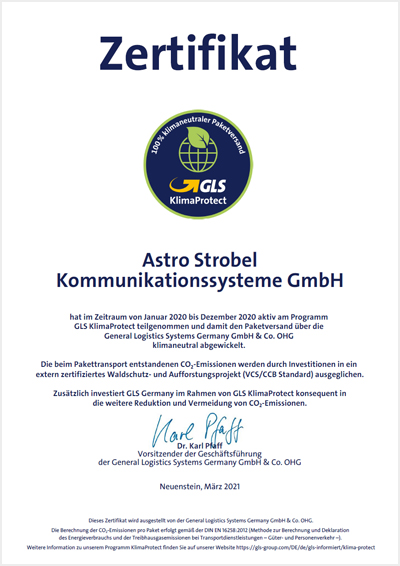 By participating in the GLS KlimaProtect program, ASTRO sets an example for sustainable and future-proof parcel logistics and thus makes a valuable, active contribution to climate protection as well as to improving the company's own environmental balance.

You have general questions about ASTRO? Please contact us.

Six short questions, one minute of your time

We want to continue to improve and inspire you in the future. Please give us just one minute of your time for six short questions. Thank you very much!